Here's our plan: Going east to spend some time around Nelson, renew my visa at the border and keep driving to Vancouver with a little vacation stop in the Okanagan valley. Off we went!

Back in the „badlands“ we already discovered our front wheels to be worn unevenly. I tried to do a wheel alignment, but Ford thought it would be a good idea to let people buy an „alignment kit“ before doing so, which of course couldn’t be found in the middle of nowhere. A new set of tires would be close to 1000 dollars, so we instead installed the bad tires on the back axle (just in case they decide to go on us) and continued heading south east. Near the US border, close to Waterton Lakes Nationalpark the scenery then finally changed from f-f to pretty neat (so neat) mountain ranges. 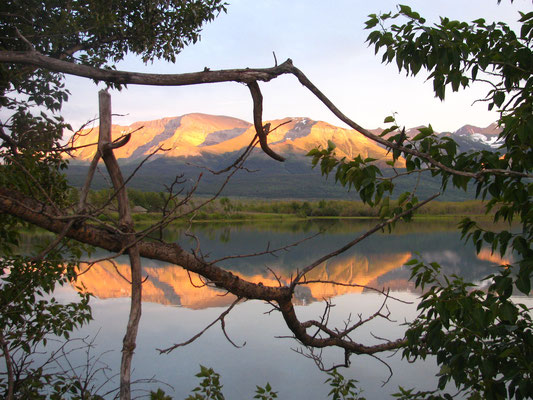 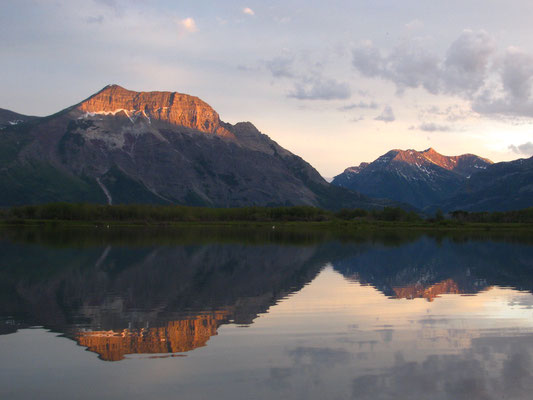 We then passed the Frank slide, which is known as the deadliest landslide in canadian history. It’s just unbelievable what happened here more then 100 years ago. Instead of visiting the expensive museum we just pulled over and read the Wikipedia article about it. Driving on the Crownsnest pass going west we entered the southern Kootenay region, where we stopped in Fernie. I somehow managed to loose all my phone pictures from that time, which is why you have to go without beautiful pictures like me hanging from the biggest mining truck in the world. We took a little detour to Lussier hotsprings, where i saw that two-legged bear last year. On two of our five maps we then stumbled upon a little pass road shortcutting from Kimberley to Gray creek, so we tried to gather information about it. Apparently the road just opened the day before, as it was closed through the winter and not many people had used it yet. Of course we went, and i have to say it was pretty extreme. We only met one other car the whole time, which was standing aside of the „road“ with two flat tires. And that was way before the road went batshit crazy and a big storm came up on top of that! We actually kept going all the way to Gray creek as we were afraid of the road not being passable anymore in the next morning. On the way back down we had to stop for the brakes cooling down, when we eventually got out to find the most impressive rainbow ever right above our heads. What an adventure! 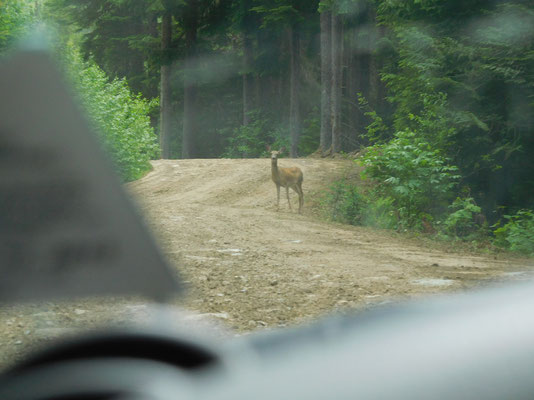 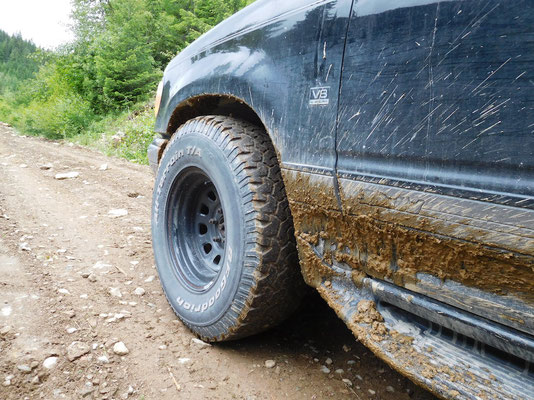 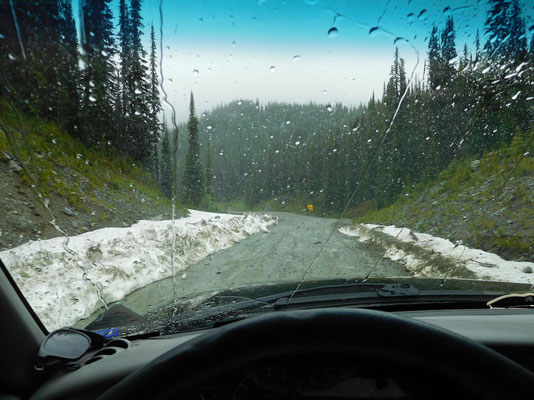 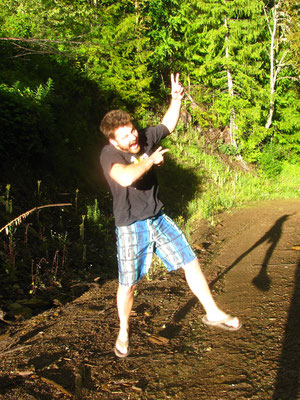 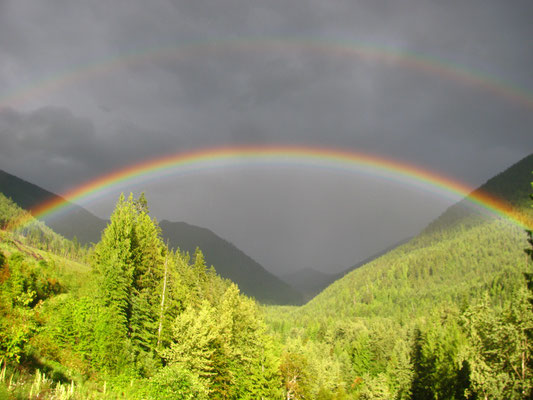 In Gray creek we found a night spot right on Kootenay Lake, and Parkplatzhomo Leo showed up with his friend Mongoanwalt. We haven’t been social for a while really, so it was kind of refreshing to share a few beers with actual people. We decided to stick together for a couple days and visited the Ainsworth hotsprings for 3 hours straight, which was perfect as it was the only rainy day in weeks. We got pretty lucky there i guess! South of nelson we just arrived to a remote recreation campsite, as one of our tires finally died. I have no idea why that didn’t happen on the pass road already! Suddenly a bunch of local Canadian gold seekers showed up and our right rear tire became the attraction of the day. As the next day was a sunday we were doomed to stay for two nights and do silly things like curb (Wikingerschach) and selfmade campfire pizza all day long. 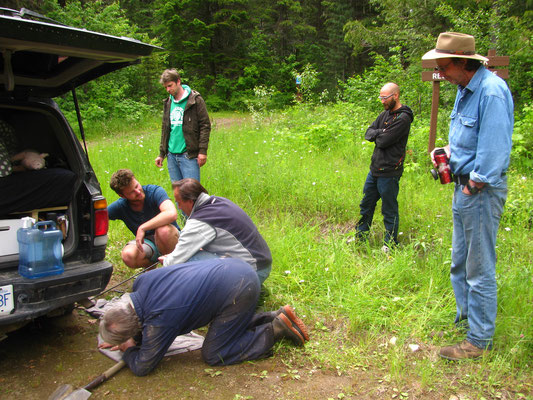 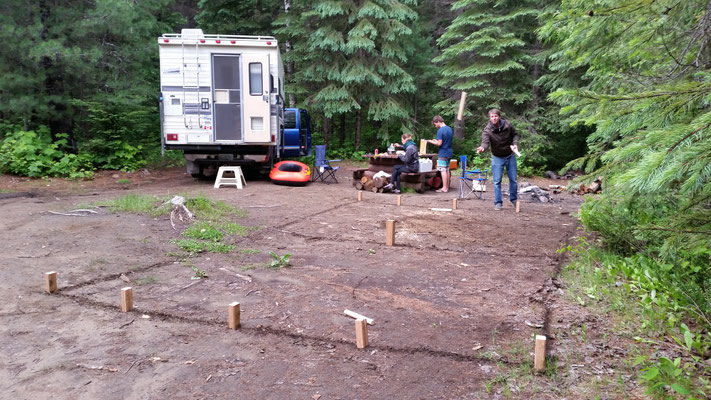 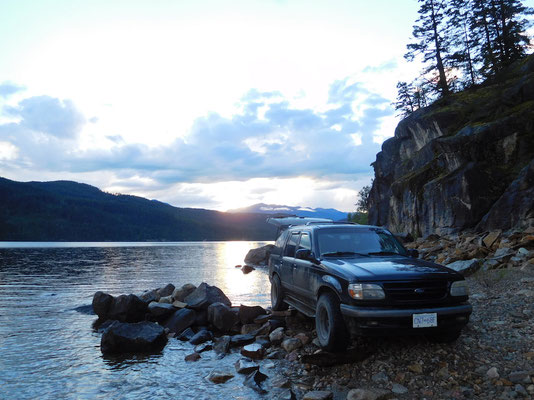 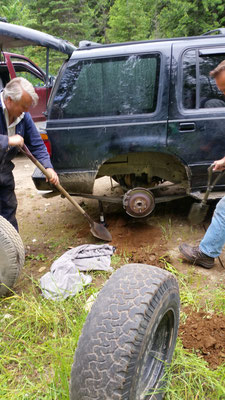 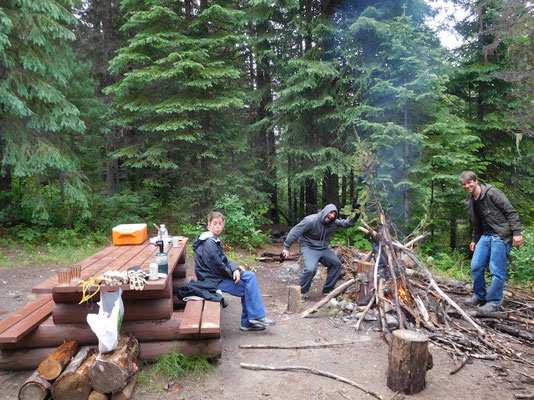 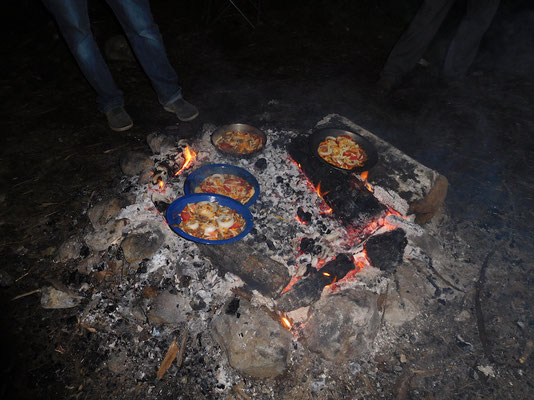 We  decided to go straight to the closest town Castlegar - but we didn’t make it. Just a few clicks before town it suddenly smelled funny, and before we could do anything the car disappeared in a big cloud of smoke. i instantly stopped the engine and we tried to tow the car into town. After the rope ripped twice we had no other chance than pushing it all the way to the next garage. It was kind of fun though as it was downhill most of the time, except that dumb lady who literally almost drove my driver door of - she just banged her passenger side mirror on it. Turned out the front differential got hot as the spare tire was way smaller then the others - Ford again didn’t think about that back then. We got lucky with our garage and they could fix it up for less then 200 bucks. I have to keep an eye on it, but for now it keeps running… on top, the shop owner felt so pity for us, he sold me two tires in decent condition for only 100 bucks cash - good to go again!

The area around Nelson is known to be pretty alternative and laid back. Some places more, some less. The little town of Slocan definitely falls under „yes“ here, as we found two older men in rasta outfits listening to reggae and smoking pot all day long, while we were relaxing on the lake for two days. They even had a little girl with a Jamaica hat with them, which we called the rastababy. Slocan only got one tiny supermarket and one cafe, and it’s basically a community. The vibes in that place were amazing and Talya even found a random violin in a local garage. We left for the first of July to celebrate Canada day (Canaday) in Nelson with booze and fireworks. 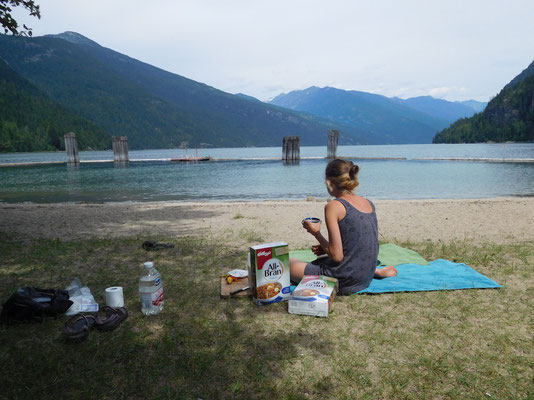 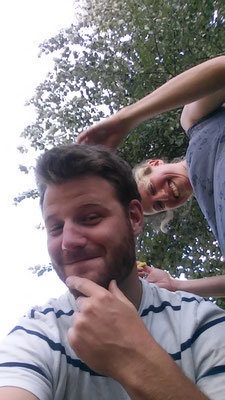 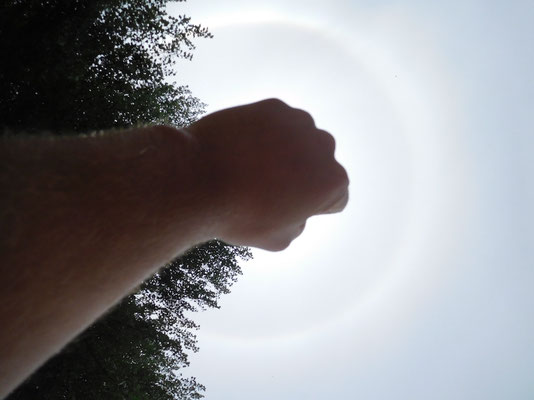 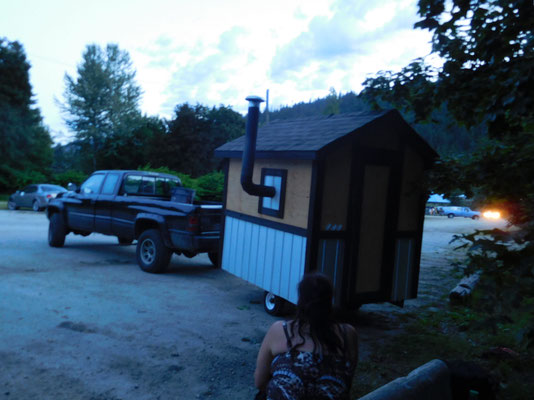 As my anniversary in Canada came closer, i left Talya in the town of Trail and drove to the US border to renew my Canadian visa. My car hasn't even stopped when the US officer (you have to turn around there to go back into Canada) started yelling questions at me. „Where is home? Who’s car is that? Where are you going? Do you have weapons?“ I wasn’t even able to explain my situation (me not wanting to enter the US yet), as he just kept going like a malfunctioned question-asking-machine. I then had to park the car and found myself locked in a „waiting room“ behind thick glass and steel, while 2 officers turned the car upside down outside. I could even see one of them browsing through my private documents, which i kept in a sleeve in my backpack. A couple tomatoes and a green onion were the only things confiscated, as i could explain all the german drugs i had with me. Finally i was allowed to turn around and head back into Canada, where the same thing started all over again. „Where’s home?“ The whole situation was way more relaxed then a few meter further south, though. No safety wall between me and the officer, a radio played in the background and my car wasn’t that interesting anymore either. I told him i need three more weeks which i then got. Well, they can not refuse anyone with a US refusal letter anyway, as a row of lawless people left for good standing right on the border line would be rather impractical, wouldn’t it? As there was no phone reception the entire time, i was picking up a rather nervous Talya two hours later and got myself a well deserved burger meal.

Our further Roadtrip was going through Kaslo, Nakusp and finally Vernon via a free ferry. South of Vernon we found a nice spot in an indian reserve with some deers grazing right next to us. Comfort zone: less then 3 meters. We then came to Osoyoos, where i spent two months last summer working in the fruit shed. An abandoned property right on the lake was the perfect spot to spend some relaxing days, and i was able to catch up with Kenny and some others as well. 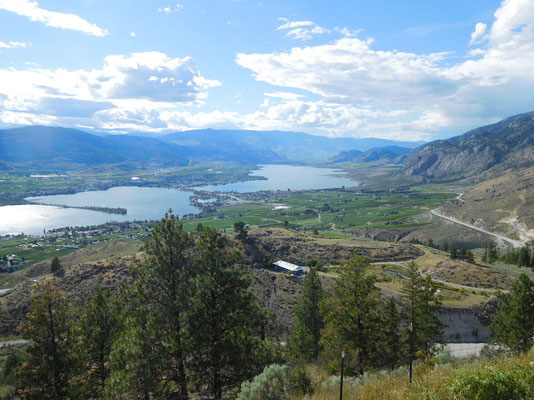 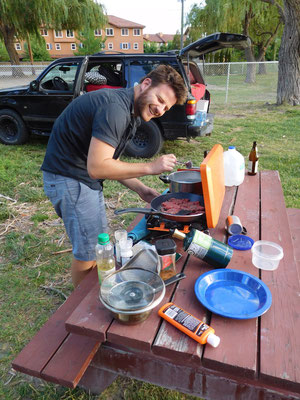 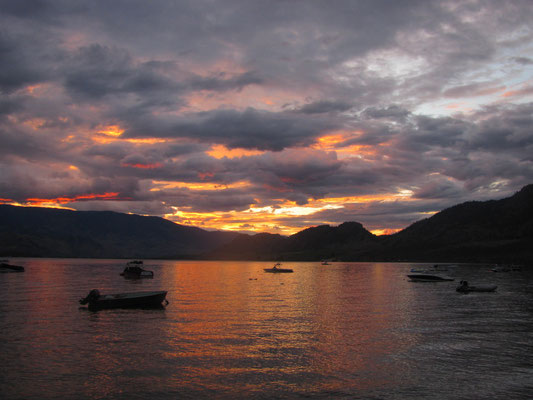 A few days ago we then used the nighttime to drive all the way to Vancouver in one piece. After two more days on Spanish banks beach, which i can easily call my Canadian home by now, it was time to say goodbye. Even though Canada didn’t always make it easy for us we had great time. Thank you, Chamuda!

During the last week i was just killing time in Vancouver, writing blog, chilling on the beach and catching Pokemon. You know, someone gotta do it and „catching some of them“ just doesn’t sound right. Tomorrow then i will leave Canada - hopefully my border experience will be as fun as the last time. I have 9 days to make my way to San Francisco, where i will pick up Winni „Centman“ Wutzbert from the airport. Good times and new impressions ahead! I love it wenn a plan comes together.